Orta San Giulio is one of the many jewels of our country.

Located exactly at the end of a promontory overlooking the Lake Orta, the village of San Giulio is the best terrace where to admire the whole panorama that the stretch of water offers.

The town is divided into the main core which is located on the shore of the lake and the Island of San Giulio, which is also part of the municipal area.

Imolo, Corconio and Legro are the other suburbs of Orta San Giulio.

Orta San Giulio has always been the main center of the “Riviera Community”, an independent consortium of municipalities existing until the mid ‘700.

In the past, Orta San Giulio was also equipped with massive fortifications, but it was decided to demolish them in 1311 as the village location ensured a lot of security and protection.

The country had to suffer, in fact, only one raid, operated in 1524 by the Sforza. 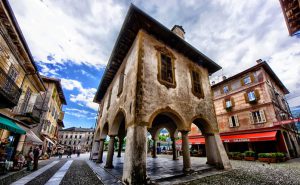 The center of the village (completely pedestrian) is particularly characteristic for its netting of very narrow alleys that make the town a magical place and of antique flavor.

In these streets you can encounter noble mansions, but also many shops and taverns where to stop to buy local items and taste typical products.

You can reach the center of the village by stone staircases, the most important is the Motta, which leads right to the namesake square, the main of the town, which is often called “the drawing room of the lake”.

Going up, you can go towards the Sacred Mount of Orta, which Nietzsche called one of the most “picturesque places in the world.” It’s included in a Special Natural Reserve characterized by forests of beech and pine trees.

Along the way is mandatory a stop at the Parish Church of Santa Maria Assunta.

But the true ‘treasure’ is located on the top of the Sacred Mount: the Church of San Nicolao, which houses inside frescoes by Morazzone, Della Rovere and Cantalupi, to name a few.

Going down the “Motta”, you can admire at its sides some historic buildings, including the Gemelli Palace and De Fortis-Penotti Palace.

The Island of San Giulio, which vaguely resembles the Santo Stefano Island off the coast of Budva (Montenegro), is located about 400 meters from the shore and houses the Basilica of San Giulio, considered the best example of Romanesque in the province of Novara.