One of the richest Italian cities of works of art is definitely Naples. It also offers to visitors traditions, culture, folklore, gastronomy and much more. A place of interest is located in Rione Sanità in Via Fontanelle, 80, the famous Fontanelle Cemetery which houses today the so-called “anime pezzentelle”.

History of the Fontanelle Cemetery

Called this way because in the past there was the presence of water springs. This ancient cemetery dates back to the sixteenth century, inside there are exposed neatly skulls, various bones and also skeletons displayed in showcases. The ossuary is in a yellow tuff quarry yellow 3,000 m2  large for a volume of about 30,000 m3.

For the most part, the corpses contained in the cemetery belong to the victims of two major epidemics occurred in Naples, plague in 1656 and cholera in 1836. But in the ossuary also lie the corpses of poor people who could not afford a decent burial. There were also other incidents that caused the deaths of many people who were buried in the cemetery. 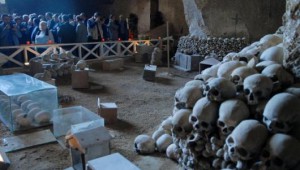 At the time of the plague, in 1656, it is estimated that it caused the death of about 250,000 people (some even say 300,000), out of a population of 400,000 inhabitants. A very impressive number, and these corpses were moved just in the quarry that became the Fontanelle Cemetery.

After the plague of 1836, an ordinance banned ossuaries in the brotherhoods and parishes of the city. So all the corpses were moved to the Fontanelle Cemetery.

The ossuary was abandoned until 1872, then Don Gaetano Barbati together with common women, managed to sort the bones in the position where they can currently been seen. It is estimated that it contains approximately 40,000 humans relics. They are all anonymous obviously, except for two skeletons exposed in coffins with glass plate: the first is to Filippo Carafa, Count of Cerreto of the Dukes of Maddaloni, who died on 17 July 1797 and that of Donna Margherita Petrucci born Azzoni, who died on 5 October 1795.

Worship Famous is the cult of anime pezzentelle

In practice people adopted a skull, called capuzzella, linked to an abandoned soul, pezzentella. They prayed, took care of it and settle it in exchange for protection. Famous capuzzelle are those of the Captain and Donna Concetta: ‘a capa che suda‘ (the head which sweats).

The cemetery was closed in 1969 because there was concern about the fetish cult, then it was reopened in 2010.

The Basilica of Santa Chiara