Located in the extreme south of the Marche region, near the border with Abruzzo, Ascoli Piceno is renamed the “city of hundred towers” for the presence of many noble and bell towers in a historic center built entirely of travertine.

A feature that makes Ascoli one of the most beautiful cities in Italy. 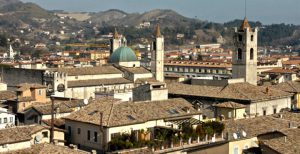 Become a free commune in 1183, it suffered looting and destruction at the hands of Federico II.

Often troubled by struggles between different factions, Ascoli distinguished itself during Second World War for the Resistance made by its inhabitants against the German occupation.

If you go to Ascoli the first ‘step’ can not be the Renaissance Piazza del Popolo.

“In Ascoli”, as it’s said around here. Really extraordinary with its portico of 59 arches and various Renaissance buildings decorated with arcades and battlements. 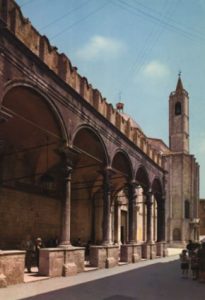 Among these, must be mentioned the Palazzo dei Capitani del Popolo, now location of the town hall, the Church of San Francesco and the Loggia dei Mercanti, in addition to another building very dear to Ascoli people, although of more liberty style: the Caffè Merletti.

We were talking about travertine, material whereby are made of all the plates that make up the floor of the square: really enchanting the ‘mirror’ reflection that takes after the rain.

Another square worthy of attention is Piazza Arringo – the oldest of Ascoli – where are located the Cathedral of Sant’Emidio (historical protector of earthquakes) and the Baptistery of San Giovanni, dating back to the medieval period. In this square we find also the Bishop’s Palace and the Palazzo dell’Arengo.

Ascoli is also characterized by many other Churches as well as the main ones.

On the whole, we want to focus on the Church of Santissima Annunziata, which stands on the Colle dell’Annunziata and on top of which you can admire the entire city. Of course do not miss the opportunity to take a look at the Ascoli towers.

The most beautiful? The Tower of Ercolani, which served mainly as visual imposition tool, and the Tower of San Venanzio, the bell tower of the namesake Church.

Ascoli is also the City of Ceramics: if you can, take a trip also to the Ceramics Museum which is located inside the Church of San Tommaso.