In the northern part of Piedmont, between Canton Ticino and Lake Maggiore, stands the Val Vigezzo which houses inside the beautiful village of Santa Maria Maggiore, famous mountain tourist resort. 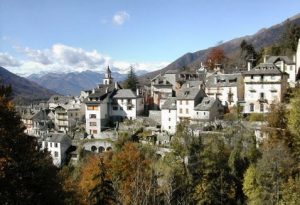 Monuments, landscapes, events: there are many things that characterize this town which has more than 1000 inhabitants. Small, but very cozy.

WHAT TO DO AND WHAT TO SEE

One of the features that makes Santa Maria Maggiore famous also outside of Piedmont is the membership and the bond with a job which has by now fallen into disuse: the chimney sweep, the most common job in Val Vigezzo in the past.

For this, in Santa Maria Maggiore there is also a museum dedicated to this ancient craft, housed inside the building of the Villa Antonia, in the historic center of the village.

The uniforms of the trade, the authentic tools, the bicycles, up to the stories of the several chimney sweeps, many of them steeped in sadness due to extreme poverty.

Also for this, the Val Vigezzo hosts the annual International Meeting of Chimney Sweepers, which takes place right in Santa Maria Maggiore in the first weekend of September.

A festival which hosts many events, above all the “Black Night”, with shops open till late, and the Sunday morning parade through the streets of the town.

Not only chimney sweeps: Val Vigezzo is known also to be the Valley of Artists.

That’s why you can not miss a visit to the Art Gallery, which houses the School of Fine Arts “Rossetti Valentini”.

Located a few steps from the center of the town, beyond offering to the visitor an exhibition of splendid paintings it also allows the attendance of paid courses dedicated to drawing, painting with watercolors and wood carving.

The connection with art is restated and strengthened by the great event that takes place in May, called “Mon Martre in Val Vigezzo”.

And then the sport. Also in Santa Maria Maggiore in the Vigezzo Valley you can enjoy ski slopes, such as the racing track of 15 km which leads to the localities of Malesco and Druogno.

If you go to this place in the summer, devote yourself to excursions instead: especially frequented the “Sentiero delle Bore”, suitable for the whole family, but there are also many paths practicable with the bike, such as those which venture into the Valley of Painters . 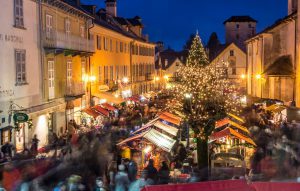 Finally, the Christmas Markets, where it is almost impossible to find an accommodation if you don’t move in time.

They usually take place in the days of the feast of the Immaculate Conception (December 8th) and have always been one of the main attractions of the enchanting Santa Maria Maggiore in Val Vigezzo.